This is a Flickr badge showing public photos from annetteruk. Make your own badge here.

Things are starting to look a little autumnal now that September is approaching. There are more grapes on my vine than I have seen in former years, however they are really only decorative and not for eating. 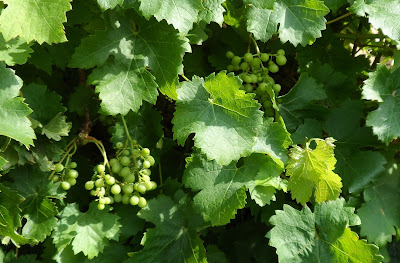 I decided to give tomatoes a rest this year and am trying sweet peppers, Capsicums. I planted several pots and this one is showing the most promise. 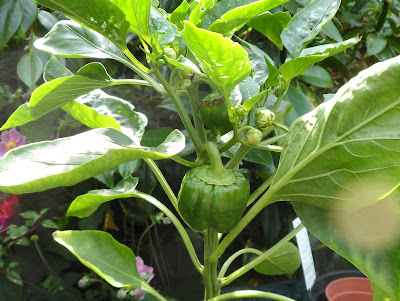 I'm picking courgettes every few days, quite small but sufficient for my needs. The runner beans are pathetic, only just starting to set so I only have three very tiny pods. 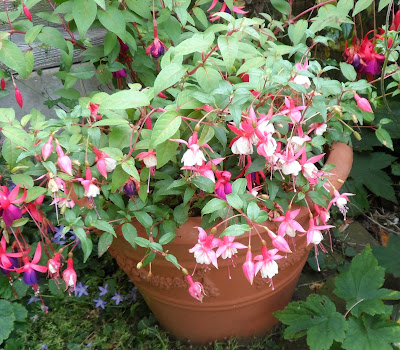 The fuchsias are flowering well and the Japanese Anemones are putting on a good show as usual. 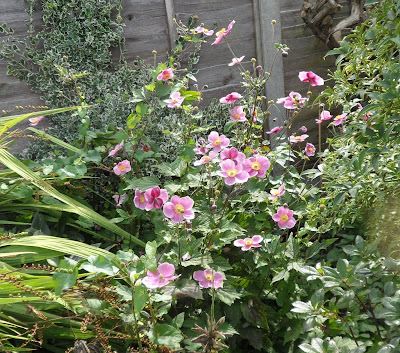 It may seem that knitting has taken a back seat recently as I have been so absorbed with the garden, not so. I have been knitting when it was too wet to go outdoors. I am trying to fill a box to send to  Loving Hands charity, still a way to go.
The sad news recently is that Coats are closing all of their haberdashery concessions in the UK which means I shall be losing my only source of Rowan yarns locally in Beatties. The only good thing is that the goods have been greatly reduced in price. I managed to get this in the sale this week....... 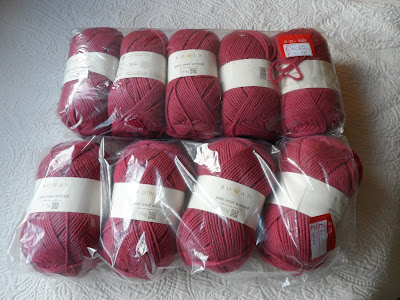 ......and have started this sweater. I made this pattern some years ago but it turned out too small for me so I had to give it to my sister. This time I'm making a larger size and as the pattern is for DK and I'm using worsted, it looks as if it may fit. 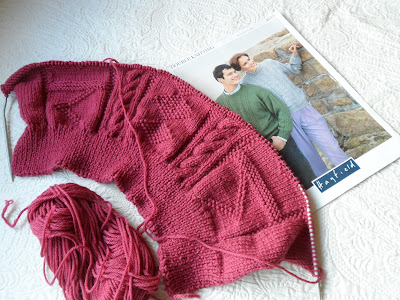 News good and bad this month. The Tayberries are cropping well. 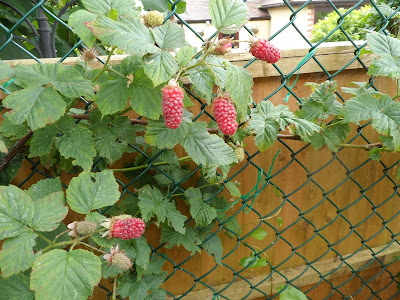 I'm picking courgettes every few days although some are quite small.
The runner beans are flowering. These are Mergoles, stringless and 'set well in all summer weather' according to the packet. 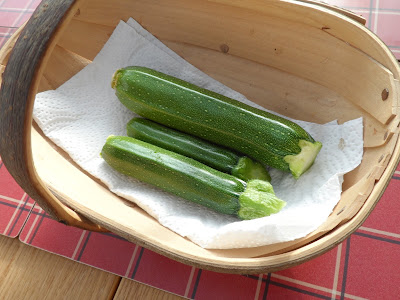 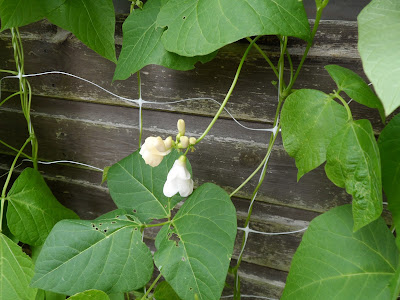 The roses have been affected by Black spot. 'Mary Rose' lost all its leaves but is sprouting again. 'Gertrude Jekyll' was also affected but not so badly. 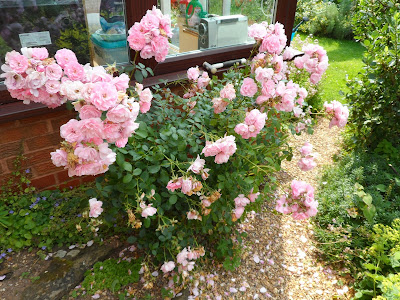 'Bonica' was not affected and put on a good show.
The Clematis have wilt but if cut down will hopefully recover next year. I'm reluctant to spray as I try to garden organically. I think the warm damp summer we are having has affected several plants. The one thing that isn't affected is the bind weed with which I have a constant battle, and I think it is winning!

Very late with this, I'm sorry. The garden looks at its best in June. The roses are flourishing. 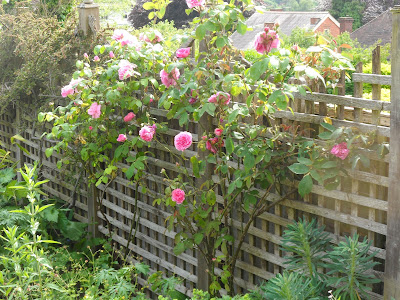 The new clematis is flowering. 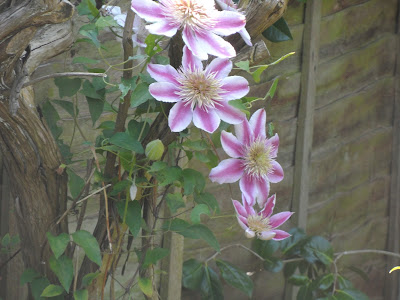 The border is starting to fill out, although something seems to be eating the Lupins. 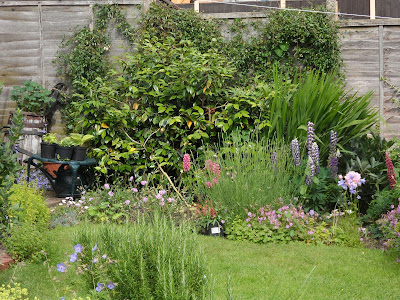 The vegetable patch is starting to show promise, lots of flowers on the courgettes although they are in quite a shady site. The runner beans are starting to climb and I've picked a few radishes and rhubarb. 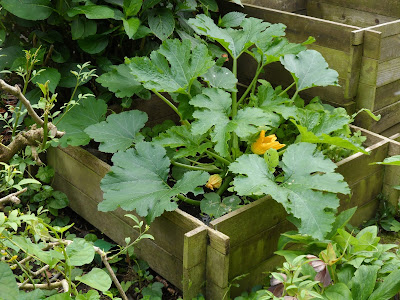 Posted by Unknown at 8:08 AM No comments:

It's difficult to know which plants to choose this month as everything is bursting into bloom. 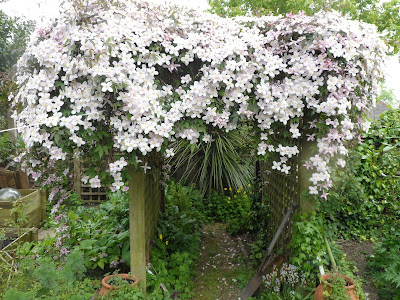 The Montana Clematis is putting on a magnificent show as usual 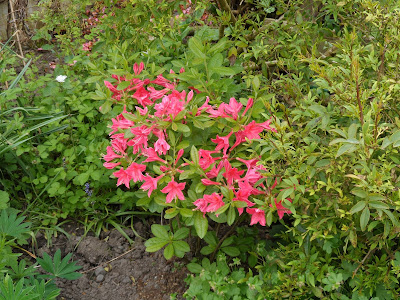 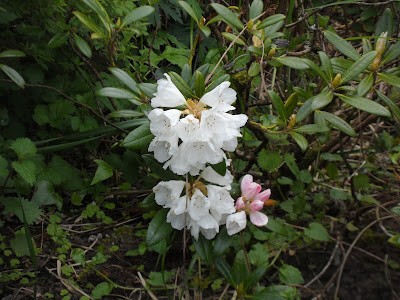 This rhododendron was originally planted in a pot which became buried under the mass of weeds. Now it has been retrieved and replanted in the ground and has managed a couple of flowers. 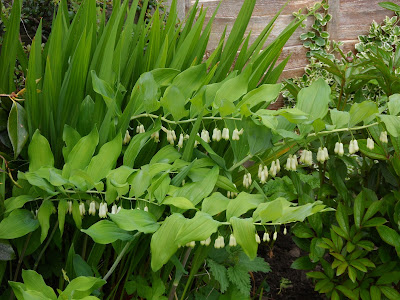 Lastly a more humble plant but none the less welcome, Solomon's Seal.

Posted by Unknown at 4:10 PM No comments:

I've been pretty busy during April mainly clearing this area around the pool , although it still needs attention especially the nettles growing under the Spirea. 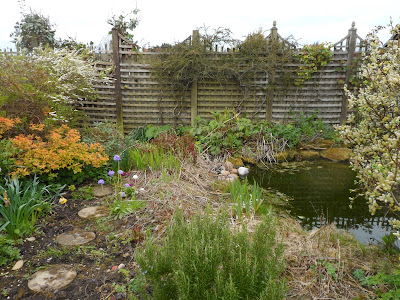 The Camellias  have done well as usual, although this one was being choked by the winter Clematis growing on the fence. 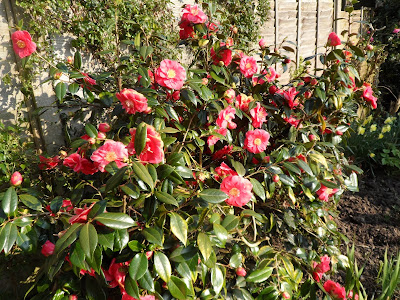 The wild life is also flourishing. This small black bumble bee is very attracted to the Pulmonaria flowers. I believe it is the hairy footed flower bee. Not one I've seen before. Also the Robins have hatched their first brood and I keep disturbing young robins in the shrubbery. 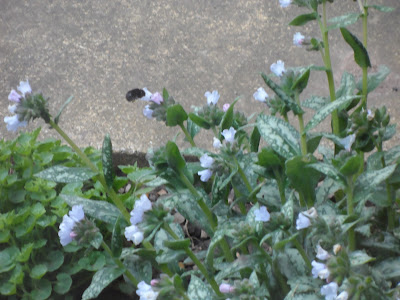 Posted by Unknown at 4:26 PM No comments:

Sorry this is so late. The photos were taken in March but I haven't got round to posting them.
Everything seems very slow this year, or perhaps I am impatient for things to get going. The first frog didn't appear in the pond until the 16th and spent a lonely time until the others joined him and frog spawn appeared on Easter day. The frogs have now disappeared but I will soon have tadpoles. 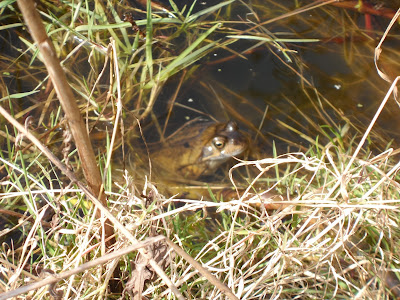 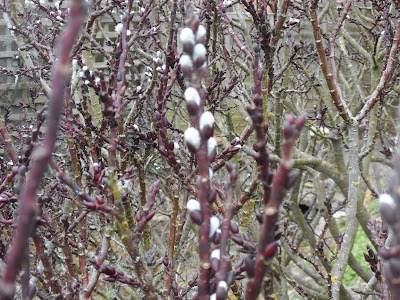 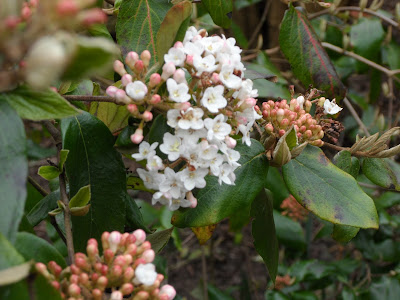 This was a very shady area but now my neighbour has pruned his trees it gets quite a bit of sun so I'm hoping to have a row of runner beans growing up the side of the shed. 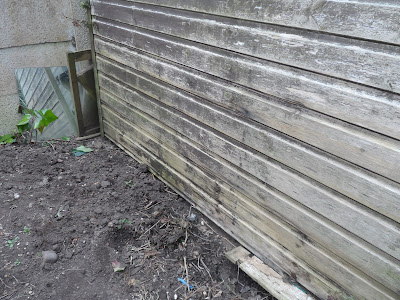 Posted by Unknown at 6:17 PM No comments: